Fun Time to be a Comics fan.

Who would have thought that something that was considered highly nerdy when I was in elementary school, would catapult to the forefront of entertainment today? With movies like Marvel's The Avenger's and DC's Dark Knight Trilogy just smashing in the box office, Agents of Shield being primed for TV, and the new Captain America being shot right here in Cleveland? It's safe to say that comics are "in" right now.
It'd been a long time since I sat down with comics, but with our Clevnet system holding so many trade paperbacks and my love of the comic world freshly renewed? I eagerly jumped back into universes of some of my favorite series, and thought I'd share some of the series I've been brushing up on.... 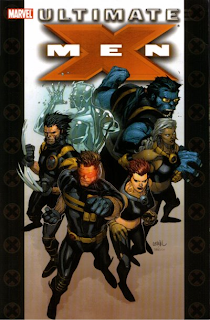 Ultimate X-Men: Ultimate Collections
If you were like me and were in school in the 90's, then you no doubt remember the X-men animated series. It was a franchise loosely based on the comic storylines but remained pretty faithful to the characters.
The Ultimate X-Men series is a reboot of that traditional franchise. Those familiar with the X-men mythos will find a number of the arcs familiar but the character designs and backstories have new modernized feeling to them. The area a number of subtle changes too that I found very interesting. It also ties in to the rest of the Marvel universe as well, so its not uncommon to see certain very famous avengers make an appearance as well. I very much got into the Ultimate series. 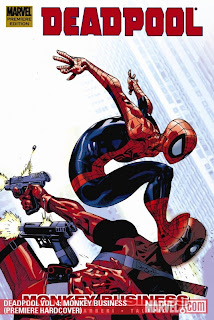 Deadpool
Don't let the name fool you, Deadpool is really funny. I've been driving my library's circulation staff insane with the number of these I've ordered. Marvel's "Merc with a Mouth" has really been growing in popularity recently and after reading through a number of his comics and can clearly see why. Pool has a pretty convoluted back story and plays second fiddle to a large number of bigger Marvel heroes and villains. So why is he so popular?

Because he's what you might call "Completely Unhinged." In between a super human healing factor and incredible combat skills, Pool will often argue with voices in his head with separate thought bubbles. He frequently references pop culture known to us the reader but not the universe, and on several occasions he just straight up bulldozes the fourth wall, because he seems to be the only one in his world who knows he's in a comic. You can pick up any issue of Deadpool and have it be funny, but our system has a lot of the classics and newer stuff to get, so feel free to start anywhere. 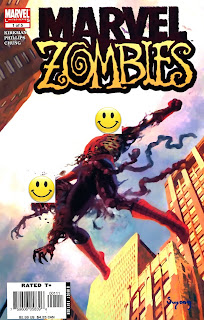 Marvel Zombies
Something else that is super popular right now is zombies. Not an interest many of my co-workers share with me but none the less, with the constant stream of films, books, comics and TV shows, its hard to deny that people love them undead walkers.
Marvel Zombies features the writing of Robert Kirkman, who some of you might know as the comic artist for the popular The Walking Dead series. And unlike most zombie stories, this one takes place from the perspective of the "heroes" after they have been infected. Zombies are bad enough, but zombies with super human powers and an uncontrollable hunger? Yikes.
As you might expect from a zombie comic, this series is a skosh ﻿on the violent side. And by a skosh I mean a lot. There is blood and gore, and a lot of it so you might want to keep this one clear of the younger kiddos. The series as a whole really is one massive exercise on how much worse things can get, but it's still a really fun read to see how storied heroes cope with becoming monsters. They also produced an offshoot where the Marvel Zombies take on Ash from Evil Dead/Army of Darkness which I found to be absolutely hysterical.

So there's just a sampling of some of the stuff I have been reading in my down time. Clevnet provides a great selection of trade paperbacks and graphic novels so you can get big chunks of the stories in each, and many of the characters have multiple issues available.  Remember folks, comics aren't just for kids and it's never too late to get started. So read some comics!
Posted by Chris at 9:49 AM No comments: