Gina and Jamie both read this suspense thriller about a mother and daughter trying to investigate school fire arson while outside their injured bodies.

Gina's Review:
I loved this book and recommend it to everyone. It was beautifully written, suspenseful, and emotional. I enjoyed the unusual perspective of the narrator being in a coma, yet able to "see" what was happening. I was caught up in her frustration of not being able to communicate what she saw to her husband and son, and of not knowing who set the fire and why. The portrayal of the family dealing with this tragedy was moving. The mystery kept me guessing until the end.

Jamie's Review:
I found this book difficult to enjoy because the suspense and mystery surrounding the fire competed with the emotional side of the book. As a result, I felt like the book was fighting between two genres. I liked the idea of the mother and daughter having an out-of-body experience together, but this concept was not emphasized as much as it could have been due to the mystery. I thought the whodunnit mystery upstaged the relationship between the narrating mother and the other characters as well as the author's literary writing style. However, I would try the first book by this author just to see how she approaches a different story idea.﻿
Posted by KPL at 10:32 AM No comments:

I'm going on vacation for two weeks.  These are the books I'm planning on reading:

A Clash of Kings by George R.R. Martin (2nd in the Song of Ice and Fire series). Throughout Westeros, the cold winds are rising. From the ancient citadel of Dragonstone to the forbidding lands of Winterfell, chaos reigns as pretenders to the Iron Throne of the Seven Kingdoms stake their claims through tempest, turmoil and war. As a prophecy of doom cuts across the sky - a comet the colour of blood and flame - five factions struggle for control of a divided land. Brother plots against brother and the dead rise to walk in the night. Against a backdrop of incest, fratricide, alchemy and murder, the price of glory is measured in blood.

The Redbreast by Jo Nesbo.  A recovering alcoholic recently reassigned to the Norwegian Security Service, Insp. Harry Hole begins tracking Sverre Olsen, a vicious neo-Nazi who escaped prosecution on a technicality. But what starts as a quest to put Olsen behind bars soon explodes into a race to prevent an assassination. As Hole struggles to stay one step ahead of Olsen and his gang of skinheads, Nesbø takes the reader back to WWII, as Norwegians fighting for Hitler wage a losing battle on the Eastern front. When the two story lines finally collide, it's up to Hole to stop a man hell-bent on carrying out the deadly plan he hatched half a century ago in the trenches. Perfectly paced and painfully suspenseful, this crime novel illuminates not only Norway's alleged Nazi ties but also its present skinhead subculture.

Wolf Hall by Hilary Mantel.  Assuming the power recently lost by the disgraced Cardinal Wolsey, Thomas Cromwell counsels a mercurial Henry VIII on the latter's efforts to marry Anne Boleyn against the wishes of Rome, a successful endeavor that comes with a dangeous price.

The Art of Racing in the Rain by Garth Stein.  Nearing the end of his life, Enzo, a dog with a philosopher's soul, tries to bring together the family, pulled apart by a three year custody battle between daughter Zoe's maternal grandparents and her father Denny, a race car driver. This is for my book discussion group -- meeting on July 30th at the Library.

I will let you know how I liked them when I get back. What are you reading this summer?
Posted by Jane at 11:57 AM No comments:

Our Summer Reading Program, Edible Bugs, was a great success. 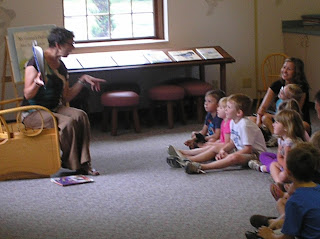 Followed by bug BINGO in which players won a book to take home and keep!﻿ 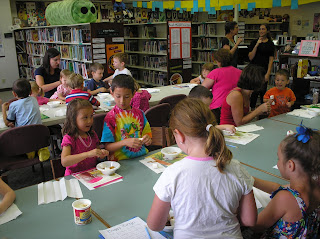 Next, we made Edible Bugs out of cookie wafers, pretzel sticks, frosting, and candy. 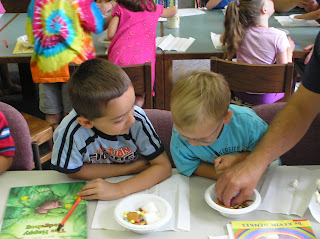 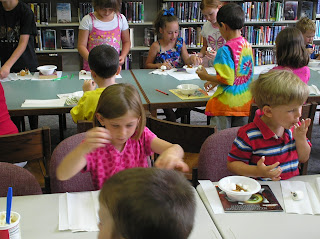 Here are some of them:

And of course there was ice cream: 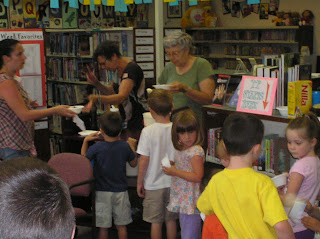 Did you really think we were going to eat BUGS? Gross!

Welcome to the Kirtland Public Library Blog where we will feature book reviews and recommendations, Library events, and some surprises.

Jane loves to read just about everything, especially mysteries and thrillers (but no horror, please). Her dream vacation destination is the San Juan Islands, the perfect place to catch up on summer reading.

Gina is a fan of suspense. She is always checking out books and awaiting the newest cliff-hanger. While she waits, she dreams of visiting Greece.

Beth's favorite books are sci-fi and fantasy and books from the middle school section of our Library. She would like to visit New Zealand, Nepal, and Tibet. She secretly wants to do magic.

Jamie mostly reads fantasy, sci-fi, and literary fiction. Her dream vacation is a cabin in the woods with a fireplace and a stack of books. She has a very long to-read list.

Chris is a reader of fantasy and graphic novels. Someday he would like to visit Tokyo and Australia. Until then, he travels the printed page.

See you at the Library.﻿ 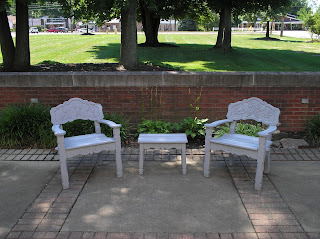