December 7th marks the 75th anniversary of the bombing of the Pearl Harbor naval base in Hawaii.  This attack by the Japanese Imperial Forces, and the later declaration of war by Nazi Germany, pushed the United States into the war on the side of the Allies.  Naturally, an event as pivotal as Pearl Harbor has attracted many, many writers and historians.  This anniversary has seen the release of several new books and there is a vast back catalog of materials to satisfy anybody’s search for answers about that fateful day.  The Kirtland Public Library has several books in our collection for anybody interested in finding out more about what occurred all those years ago.  If you cannot find what you are looking for you can ask any one of our helpful librarians to help you find what exactly you are looking for.

Pearl Harbor: From Infamy to Greatness by Craig Nelson (2016)

A Matter of Honor: Pearl Harbor: Betrayal, Blame, and a Family's Quest For Justice by Anthony Summers (2016) 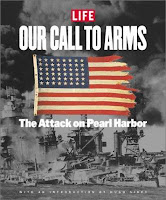 Our Call to Arms: The Attack on Pearl Harbor by Robert Sullivan (2001)

At Dawn We Slept: The Untold Story of Pearl Harbor by Gordon W. Prange (1991)