This month the Kirtland Public Library recognizes Black History Month.  Here we feature short biographies of famous African Americans, which are also part of the second children’s scavenger hunt for February.  If you are interested in reading more about the people featured in these short biographies ask a librarian for help in locating more information about them. 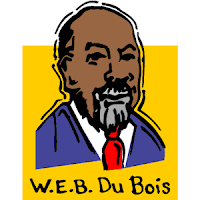 W.E.B. Dubois (1868-1963):  A well-known sociologist, historian, and civil rights leader, Dubois was the first African American to earn a Ph.D. from Harvard University.  During his lifetime Dubois published several works that are still widely-read today, such as The Souls of Black Folk and Black Reconstruction.  Dubois died in 1963 at the age of 97 in the African country of Ghana. 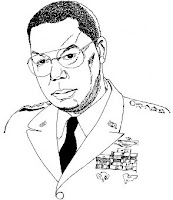 Colin Powell (b. 1937): Powell, born the son of Jamaican immigrants, in Harlem, New York City. He was raised in the South Bronx.  During a 35 year career in the United States Army, Powell rose from the rank of Second Lieutenant to General.  He ended his career as the 12th Chairman of the Joint Chiefs of Staff, which made him the youngest officer, at 52, to hold that position, the first African-American of Caribbean descent, and the first to receive his commission through the ROTC program.

Thurgood Marshall (1908-1993): Marshall served at the 96th justice on the Supreme Court of the United States and was the court’s first African American justice.  He is perhaps best known for arguing the landmark desegregation case Brown v. Board of Education before the U.S. Supreme Court.  In 1967 President Lyndon Johnson named him to the Supreme Court, on which he served until his retirement in 1991.

Rosa Parks (1913-2005): Rosa Parks was an African American civil rights activist.. On December 1, 1955 Rosa Parks refused to give up her seat on a bus for a white man after the white section filled up.  Her act of civil disobedience helped ignite the Montgomery Bus Boycott, which would last for 381 days and would lead to the desegregation of the Montgomery buses. 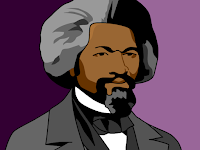 Frederick Douglass (1818-1895): Born a slave in Talbot County, Maryland, Frederick Douglass was a prominent abolitionist, social reformer, and writer.  During his life he fought for the abolition of slavery and woman’s right to vote.

Dizzy Gillespie (1917-1993):  A famed jazz trumpeter, bandleader, and composer.   Gillespie is best known for his trademarked trumpet, which featured the horn bent up at a 45 degree angle. 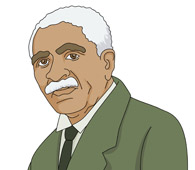 George Washington Carver (1860-1943): Born into slavery in Missouri, Carver is best known as a botanist and inventor.  He advocated growing alternative crops, such as peanuts, soybeans, and sweet potatoes, as ways to improve the health and well-being of farmers and their families. 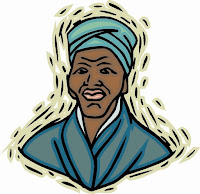 Harriet Tubman (1822-1913): African American abolitionist, humanitarian, and during the Civil War, a spy.  She is perhaps the best known “conductor” on the Underground Railroad – a series of safe houses which helped runaway slave escape to freedom in the northern states and Canada. Later in life Tubman promoted the cause of women’s suffrage, or the right to vote. 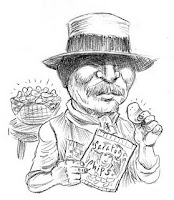 George Crum (1828-1914) George Crum is a mixed African American/Native American cook and restaurant owner.  He started off as a cook in Saratoga Springs, New York, but by 1860 he owned and operated his own restaurant in Malta, New York.  Legend has it that he invented the potato chip after a difficult customer kept sending back French fries claiming they were cut too thickly and not cooked enough.