The Holiday is a time to spend with friends and family.  As we dig out our old decorations and add new ones our homes are transformed into a wonderland of twinkling lights, candy canes, gingerbread, and homemade cookies.  At the library we also bring out our Holiday items and make displays featuring movies, books, cookbooks and CDs.  Here at the Kirtland Public Library we would like to take a moment to talk about some our Holiday favorites.

SilentNight: The Story of the World War I Christmas Truce by Stanley Weintraub (Chad's Pick)
Anybody who knows me knows that I am a huge history buff.  I love all types of history, but I’m most interested in World War II and the U.S. Civil War.  The first book of Weintraub’s I read was Silent Night: The Story of the World War I Christmas Truce.  That book revealed to me a little known event from the First World War where British and German troops temporarily laid down their weapons to share a common Christmas celebration: setting up Christmas trees, singing carols, trading food and tobacco, and even playing a game of rugby.
Unfortunately, as the war progressed, these sorts of temporary truces disappeared; discouraged on both sides by the officers.  Weintraub has also written extensively on Christmas during other conflicts.  His books run the gamut from the AmericanRevolution, to the U.S. Civil War, World War I, World War II (and this one), and Korea.

The Year of the Perfect Christmas Tree: an Appalachian Story by Gloria Houston 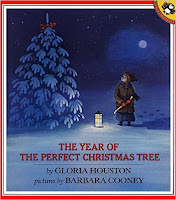 What’s my favorite Christmas story? That is a very difficult question for me…you see, I have a collection of over 125 Christmas books and it’s hard to pick just one. So what’s my favorite? Is it Christmas on Jane Street by Billy Romp or The Bird’s Christmas Carol by Kate Douglas Wiggin? Could it be A Christmas Memory by Truman Capote (the edition illustrated by Beth Peck) or Skipping Christmas by John Grisham, or possibly, Wombat Divine by Mem Fox?
After careful consideration I have decided that my favorite Christmas story is The Year of the Perfect Christmas Tree: an Appalachian Story written by Gloria Houston and pictures by Barbara Cooney. This is a wonderful story set at the end of WWI, in a tiny community in the Appalachian Mountains. It’s Ruthie’s family’s turn to provide the Christmas tree for Pine Grove. But Papa has been called to war; Ruthie and her Mama wonder how they will get the tree to town. This is a fictional account of a story that was passed down by the author’s grandmother and the illustrations are lovely. Check it out; it’s sure to become one of your favorites too!
Must see Christmas movies are: Holiday Inn, It’s a Wonderful Life, White Christmas and Elf. Remember, the best way to spread Christmas cheer is by singing loud for all to hear!!]

A favorite Christmas movie of mine that I have to watch every year is The Family Man starring Nicholas Cage and Tea Leoni. It's a funny modern day take on A Christmas Carol where a single, wealthy Wall Street trader, who's living the high life in New York City, wakes up one Christmas morning in suburban New Jersey. He finds he now has a wife and two kids and has traded in his Ferrari for a minivan. All through the movie he's trying to figure out how to get his old life back and not lose his mind. It's one of my favorites because it's a funny, heartwarming tale of figuring out what's most important in life. It's perfect for people who like second thoughts and second chances.

My favorite Christmas movie is Mr. Magoo's Christmas Carol, an animated film from the 1960's. It basically follows the Christmas Carol plot, but adds original music, humor, and the cutest cartoon characters ever. 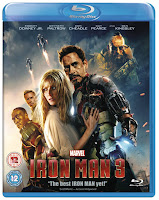 Since, for lack of a better word, I am a bit of Scrooge when it comes to this holiday, I wouldn't say I have much of a favorite holiday movie. But, since there is a contingency of people who believe Die Hard is a Christmas movie, Then I contest that Iron Man 3 totally counts as a Christmas movie as well and has been my December tradition since the dvd was released.

Sure, the movie MAY be about Tony Stark coming to grips that after the Avengers incident, the universe is much bigger and scarier place than he thought. While dealing with his demons he also goes toe to toe with terrorist threat, The Mandarin, and business threat Aldrich Killian and his thugs while trying to figure out their dangerous Extremis compound.

But let's run the checklist: Takes place during holiday time, has numerous Christmas carols throughout the soundtrack, follows a Christmas Carol pattern of facing his past, a present situation, and re-prioritizing his future complete with a small boy working as a Tiny Tim style character, has gift giving, snow, and a revelation at the end which helps Tony with his outlook and making him better for it. In my book this movie totally counts.